Pasta with Zucchini and Sausage and Do You Think I’m a Hippie? 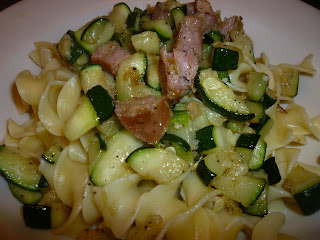 Hi everyone. Am I a hippie? Look at my week and you be the judge:

Purchasing stainless steel cups and plates for my kids while tossing out all my plastic ones from my drawers: www.yellowmargosa.com

Bringing myself and my kids to a Fair Trade Teddy Bear tea party with a Fair Trade expert to expose all of us to the concept of fair Trade commerce: http://www.terramontclair.com/

Tending to my compost bin, trying to remedy the horrible fruit fly problem I have in there

Attending a Health and Wellness meeting benefiting the schools in my town: http://www.montclair.k12.nj.us/WebPage.aspx?Id=809

It is hard to be earth friendly and on top of all the different studies regarding what foods are bad for you this week that were fine for you last week. Keeping up with staying informed, living healthfully and teaching your kids how to be responsible for themselves, others and the earth is a lot of pressure. No wonder so many of us want to throw in the towel, not think about it and just order in. Just a few more obstacles to cooking from home.

Well, call me a hippie but, for me, it’s worth it to stay on top of all of the above. It is a lot of work but I am inspired by my incentive to keep my family and the people around me strong, safe and healthy.

So,am I a hippie? Cast your vote. If I get over 15 comments casting a vote, I will post a picture of me totally hippied out. Oh, you think I’m kidding?

For now, enjoy my latest way to eat zucchini:

In a frying pan, heat up oil over medium heat. Add diced zucchini and garlic. Stir over low-medium heat until zucchini starts to get a little brown and breaks down a little, about 10 minutes. Add the sausages and cook until heated through, about 5 minutes. Pour over cooked pasta and salt and pepper to taste.
Serves 4