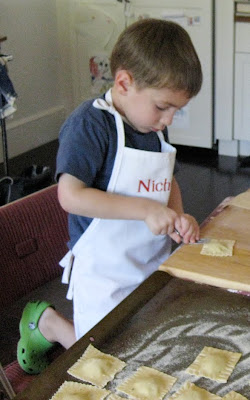 Hi everyone. Welcome to January Kids’ Cooking month on Take Back the Kitchen. Remember, there will be a poll at the end of January to decide which 5 contestants will make their recipe on Channel 34. Keep sending them in to alma@takebackthekitchen.com!

These recipes are getting so interesting. Check out this dinner option from a local 6 year old (note-he is not making ravioli as shown in the photo!)…

Alma- I’d like to submit my son, Nicholas’s (6YO) recipe that he made up in the back of the car one day.

The way he described his recipe was as follows:

“It’s chicken with white wine and rosemary, and you cook it with fresh tomato juice, garlic and cinnamon.”

I said it sounded pretty good and asked what he called it. He said “Chicken Sabate” (that’s suh BAH tay).

We got home and talked about it some more and then set out to make it. The recipe that follows is what we wound up codifying from experience and his initial description.

1. Marinate the chicken in wine & rosemary for a little while (too long will begin to denature and “cook” the chicken, so pull it before it cooks!)
2. Remove chicken from marinade, lightly pat dry, and season with salt & pepper
3. Sautee chicken in olive oil over medium heat until done, remove from pan and tent to keep warm
4. Add white wine to deglaze pan
5. Crush tomatoes in your hand over the pan to allow juice to drip into pan; add tomatoes to pan
6. Add garlic, cinnamon stick, and chicken stock to pan and reduce to a silky sauce.
7. Add chicken back to pan, toss, and serve